The Make Data Count team is rapidly approaching the first release of standardized and comparable data level metrics (DLMs) on California Digital Library’s Dash and DataONE repositories. Resources on this release will be available shortly, but in the meantime the team would like to share updates on work completed in winter and our spring roadmap.

Before the Research Data Alliance (RDA) 11 Plenary in Berlin, MDC team members met for a day to map the work towards reaching our minimum viable product (MVP) by May. The focus of Fall 2017 – Winter 2018 was releasing a recommendation for counting data usage metrics. Now that this standard has been released, the team is utilizing it as guidance for processing logs at the repository level and sending these reports to a centralized open hub (at DataCite for access and aggregation).

Discussions for log processing, hub aggregation, and display at the repository level centered around the interactions between and roles of a repository, DataCite hub, and CrossRef Event Data (architecture map to be released this summer). The team also discussed how to tackle publication date (when repositories allow for delayed publication for peer review reasons), how Scholix and Event Data work together, how how citations will be pulled, and what resources should be produced for the community to implement MDC at their own repositories. For more information please check out our public Github.

Our goal is to release the first iteration of DLMs in May. With this release in Dash and DataONE we will also be providing:

We have been collecting a list of repositories that have expressed interest in processing and displaying comparable DLMs, but if you have not yet been in touch with us please do contact us.

While at RDA, members from the MDC team presented at the Scholix (Kristian Garza and Martin Fenner pictured below) and Data Usage Metrics Working Group sessions. 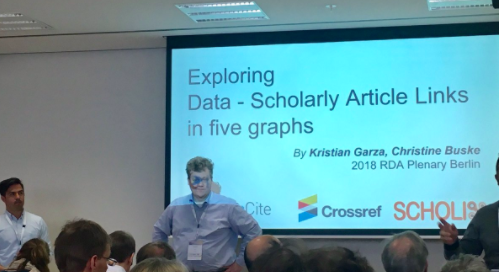 The Data Usage Metrics WG was recently formed to engage the community in discussions around needs and priorities for usage metrics (and not just following the path of article level metrics). At this first session Make Data Count was presented by John Chodacki (CDL), Kristian Garza (DataCite), and Dave Vieglais (DataONE) pictured below. Wouter Haak presented ongoing initiatives at Elsevier and members from the audience shared out their work in this space. 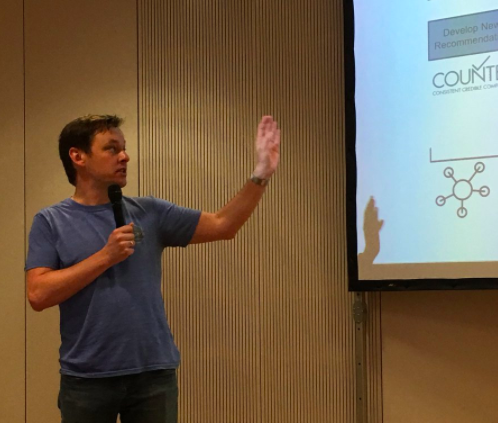 Full notes and a recording of this session are available. While the focus of the group is broader than the Make Data Count use case, we encourage anyone interested in this space to join the working group.

Beyond RDA, members from Make Data Count were invited to the AAMC/NEJM/Harvard MRCT meeting on “Credit for Data Sharing” where MDC was briefly presented as an example of infrastructure for credit. Throughout Spring and Summer, MDC plans to direct outreach at repositories on how and why to get involved, and how and why publishers should index data citations. For repositories to be able to display citations, they need to be indexed by publishers with Crossref. A priority for the MDC project is to elevate the number of publishers doing this. To do so we will be releasing a series of resources for repositories and publishers virtually and in person at conferences.

Catch us this summer at: